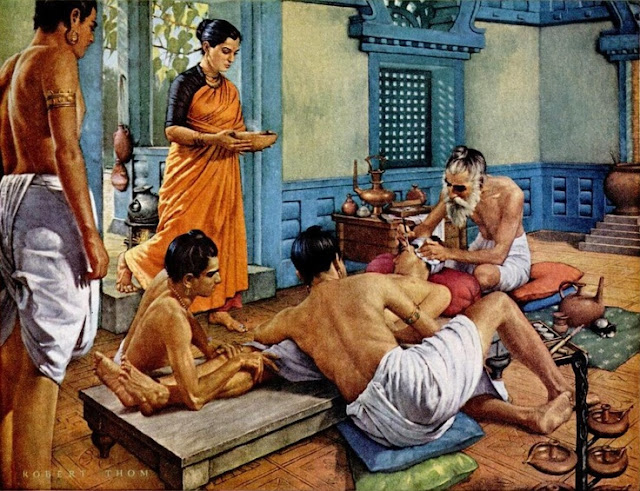 "Ayurveda is a science, which describes the beneficial (hita) and the non-beneficial (ahita) aspects of life, the happiness and pain in life, their quality and quantity"

Charaka Ayurveda is the oldest system of health- care, which traces its roots to the Vedas.

It is considered as one of the best alternative systems of medicine. The word Ayurveda is derived from the Sanskrit word 'Ayuh' meaning life and 'Veda' meaning 'Knowledge'. Hence Ayurveda is called 'The science of life'.

Ayurveda has originated from the Vedas and is said to be an Upaveda (sub-Veda) of the Rig Veda. Ayurveda may also be traced to the Atharvana Veda.

Vedas are the knowledge of universal consciousness, which comprises of-

Vedas are the embodiment of the universal truth and the ultimate knowledge, which always exist in the universe. This makes Ayurveda is eternal and endless.

The written documents of Ayurveda exist since 6000 -5000 BC.The famous sage Veda Vyasa was the first to put the complete knowledge of Ayurveda into writing.

Ayurveda is an eternal science that existed in the universal consciousness. Brahma (The Creator) first recollected the science of Ayurveda.

and then to Bharatvaja Aatreya & Dhanvantari

When diseases began to trouble human beings in this world causing hindrance to acquisition of dharma (righteousness), artha (wealth), kama (desires), moksha (salvation), the sages met in the assembly of the Himalayan slopes. After a deep discussion, they decided to learn Ayurveda from Lord Indra. Then Rishi Bharatvaja was elected as their representative and he was sent to Lord Indra.

Bharatvaja after learning the Science of Ayurveda thoroughly came down and propagated it to the other sages.

Punarvasu Atreya one among them propagated this science of Ayurveda to his disciples Agnivesa, Bhela, Jathukarna, Parasara, Haritha & Ksharapani.

Each one of them wrote treatises embodying the teachings of their preceptor. Agnivesa's treatise was adjudged as the best and became popular in this world.

The famous sage of Bharatvajeeya parampara is Charaka who was the disciple of Agnivesha. He has made an excellent treatise in Ayurveda called Charaka Samhita. It was written in early 1000 BC.

At another time Divodasa, the King of Kasi, who is said to be the incarnation of Adi deva Dhanvantri (the god of Ayurveda), learned this science directly from Lord Indra.

The sages who came in the lineage of Dhanvantari are called Dhanvatareeya parampara. They excelled in surgical treatments.

The famous sage of Dhanvantareeya parampara is Sushruta. He has made an excellent treatise Sushruta Samhita.

Sushruta is said to be the "father of surgery". In his book, he has explained various surgical procedures. Sushruta Samhita was written in early 1000 BC.

After their period around 500AD, there comes another famous sage Vagbhatta. He wrote a treatise named Astanga Sangraha by collecting the essence from all the previous treatises.

It has three pillars of medical science, viz. Hetu (knowledge of the cause of diseases - etiology), Linga (symptoms) and Aushada (therapeutics).

Charaka was a physician who was always traveling. He was a disciple of Agnivesha who wrote the Atreya Samhita.

Charaka rewrote the Agnivesha Samhita (in about 1000 BC). Around 400 AD, Drdabala worked upon Charaka Samhita and re-formed it.

This re-formed version of Drdabala is available to us as the "Charaka Samhita".

Many chapters in Charaka Samhita are in the form of symposiums; where in groups of sages take in certain topics for discussion. The text, which is written in Sanskrit, is in the form of prose and verses.

It contains 8,400 metrical sentences. The focus is on "Kaya chikitsa" the internal medicine, which aims to balance the "Agni", or the digestive fire, responsible for metabolism.

The word "Sushruta" means "one who listens very well". Sushruta was a surgeon. He was the disciple of Divodasa Dhanvantari of the Dhanvantari lineage.

The text belongs to around 6th century BC. Due to his contribution to surgery, he is termed as "Father of surgery."

Later, around the 2nd century BC, the text was re-edited by Nagarjuna.

The text explains various surgical procedures and includes techniques to repair torn ear lobe, cleft palate and disfigured nose, uniting the torn intestines, removal of the prostate gland, removal of cataract, draining of abscesses and also some surgical procedures in the brain. He has explained about the dissection of cadavers and the method to preserve them besides describing 101 kinds of blunt instruments (yanra) and 20 kinds of sharp instruments (shastra).

Around 5th century AD, Vagbhatta compiled a treatise named Ashtanga sangraha. It combines both the above treatises, explaining all the 8 parts of Ayurveda including, Kaya chikitsa (internal medicine) and Shalya tantra (surgery).

Ashtanga sangraha excels in explaining the basic concepts of Ayurveda. It explains all the basics of Ayurveda, such as the

Seeing that the text Ashtanga sangraha is very elaborate the same author Vagbhatta has also written a text called 'Ashtanga hrdayam'. Ashtanga hrdayam is more concise; it covers all the 8 parts of Ayurveda.

Ashtanga sangraha is written in both prose and in the poetry form while Ashtanga hrdayam is completely written in poetry form, which is easy to memorize.

The lesser triad comprises of the following books-

This treatise was written in 15th century AD by Sharngadhara. It is divided into three parts and is well known for its detailed explanations of pharmacological procedures.

It clearly tells about the quantities and ratio of herbs to be added while preparing medicines. The book has also elaborated on pulse diagnosis.

This book was written in the 16th century by Bhava Prakasha and is a compact representation of the earlier classical texts.

It has a large section called 'Nigandu' which is devoted to the elucidation of the qualities and indications of the different medicinal plants, foods, herbs, and minerals. It quotes many verses directly from earlier writers.

Madhava Nidana was written by Madhavakara around 700 AD. It is very popular for its detailed explanation of several diseases. It also quotes most of the verses directly from the previous classics.

It explains a wide range of diseases from fever to many adult diseases, besides the illnesses that affect children, women and the aged. Diseases caused by various poisons and diseases of the eyes, mouth, ears, and nose have also been explained. For each disease, the book explains -

*But this text doesn't explain about the treatment of the diseases.

The Eight Branches of Ayurveda

Ayurveda has 8 branches in it. They are-

4. Urdhvaanga Chikitsa (Treatment of disease above the clavicle),

The word 'Kaya' represents 'Agni' - the digestive fire in the body. It is responsible for the metabolism in the body. The imbalance to this 'Agni' is the cause for many diseases.

Kaya chikitsa deals with the treatment of general ailments, such as fever, diarrhea and cough, by treating Agni.

• The dosage of medicine is different for them

• The medicines given to them must be palatable to them.

Due to these conditions, treating children is done in a different manner. Hence a separate branch is devoted to them.

This branch of Ayurveda deals with diseases like insanity, epilepsy, and diseases caused by the affliction of external factors such as evil spirits and ghosts. In other words, it may be known as the branch that deals with the treatment of psychosomatic diseases.

It deals with the treatment of diseases caused by foreign bodies and diseases that need surgical therapies. It is carried out only for diseases, which cannot be cured by medicines.

This form of treatment deals with the treatment of poisoning from animals, such as snakes, insects, spiders, scorpions and also of plants, metals, and minerals.

It deals in rejuvenation and restoring the youthfulness of an individual and deals with various therapies and herbs that have to be taken to restore the youth & vitality.

This branch of Ayurveda deals with treatment that helps to get good progeny. It provides various medicines and therapies to improve the virility and the sexual prowess of a person to help him to get a good progeny.