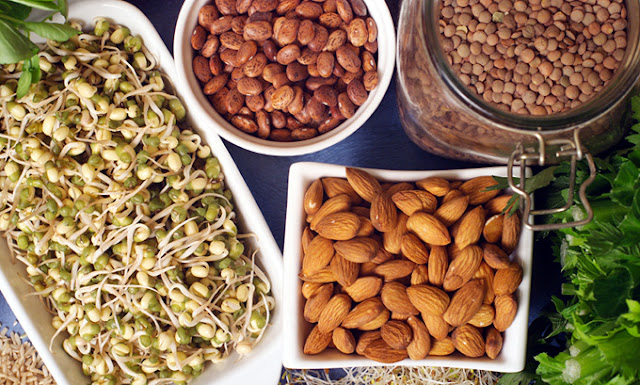 I am sensitive to the needs of my fellow vegetable lovers, who are often in need of good vegan protein sources. If you don’t eat meat, I understand your concern about protein. It’s a crucial part of how our body grows and repairs itself, so you have to make sure you’re getting enough of it.

However, the common refrain that it’s not possible to get enough protein on a vegan or vegetarian diet is very misleading. There are plenty of wonderful, vegan protein sources available, ultimate superfoods that you might not immediately think of as proteins.

The most important factors when considering vegan protein sources come down to making sure you get enough calories overall and a wide variety of amino acids.

Even the vegetables that are high in protein (for plant-based foods) are lower in calories than animal-based foods, so you’ll need more calories to get the protein you need.

You also need to rotate the vegetables you eat for protein, as relying on only one or two vegan protein sources keeps you from getting all of the amino acids your body needs.

Vegans need accurate and usable information in order to make the right nutritional choices. With that in mind, I’m going to tell you ten of the best vegan protein sources you can eat and even share some delicious ways to incorporate them into your diet.

I’m also going to warn you about two of the most common vegan protein sources and explain why they have no place in your kitchen or your body.

Before we get into specific vegan protein sources, I want to clear up some of the myths and misconceptions about proteins and the vegan diet and also explain how much protein you really need for optimal health and muscle-building.

This one of the biggest and oldest arguments vegans hear about protein in their diets.

It’s also one of the most misleading.

However, as long as you’re eating a wide variety of vegan protein sources over the course of several days, your body will draw from them the essential amino acids it needs. You do not need to get all of them in one meal or even in one day.

Our bodies also store amino acids and recycle them as well, so a balanced diet will ensure that any given amino acid is available when it’s needed.

This is one of the reasons (along with getting a variety of vitamins, minerals and antioxidants) that you need to eat from a wide variety of vegan protein sources, rather than relying on a few go-to foods.

2. Animal proteins are better for you than plant-based proteins.

3. You need to combine foods in order to derive enough protein.

This, and the myth about complete proteins, is why rice and beans has become such a staple meal.

Unfortunately, it’s also why a lot of vegans and vegetarians become absolutely sick of rice and beans!

For a long time, vegetarians were told that they needed to combine proteins in order to get a complete protein at each meal. For instance, you might be advised to eat corn and lentils together, since corn lacks lysine but contains sulfur and lentils lack sulfur but contain lysine.

There’s nothing true about this at all.

We know that our bodies store amino acids in their muscular and liver amino acid pools. As long as you eat a variety of proteins, your body will take any “missing” amino acids and do the combining of proteins itself.

There’s nothing wrong with combining foods to get all of the essential amino acids in one meal, but it isn’t necessary, either. As long as you’re getting a wide variety throughout the week, your body will do the combining for you.

In some cases, this is true, but you can also improve the digestibility of many vegan protein sources by cooking them lightly, soaking or sprouting them or by supplementing with digestive enzymes and hydrochloric acid.

One of the reasons that plant-based proteins get labeled as “less-digestible” and therefore less desirable is that cooking does change the digestibility of some proteins. This is the main reason that raw foodists are so adamant about going raw.

Here’s what’s going on when protein is cooked: As a protein is heated, its surface area shrinks, making it harder for digestive enzymes to get in there and start breaking down those peptide bonds. This means it will take longer to utilize those amino acids.

Also, some amino acids are especially sensitive to heat, such as lysine, tryptophan, methionine, cysteine, histidine, and arginine. You need to try to get as many of these amino acids from raw or very lightly cooked foods as you can in order to ensure an adequate supply.

While I’m not a raw vegan, I do think that the more raw foods you incorporate, the better. That said, go with your palate on this; it’s better to eat cooked kale than no kale at all.

6. Vegans are subject to amino acid imbalances because plant proteins themselves are imbalanced.

As long as you’re getting adequate calories from a variety of vegan protein sources, this simply isn’t the case. What is a problem is supplementing with individual amino acids.

People who lack a significant amount of one amino acid or another can supplement with those amino acids, but this should only be done intermittently, with six-to-eight weeks of supplementation followed by three-to-four weeks without. Because of this, I strongly recommend that you get your amino acids through whole foods rather than supplementation.

Secrets They Don’t Want You to Know About Protein

Did you know most of what you’ve been told about protein has been heavily influenced by the sport of bodybuilding and protein manufacturers?

Considering their goal is to sell MORE protein, it begs the question, “Are you been lied to by misleading claims and misinformation about protein?”

Yuri Elkaim - Yuri Elkaim is one of the world’s most trusted health and fitness experts. A former pro soccer player turned NYT bestselling author of The All-Day Energy Diet and The All-Day Fat Burning Diet, his clear, science-backed advice has transformed the lives of more than 500,000 men and women and he’s on a mission to help 100 million people by 2040.