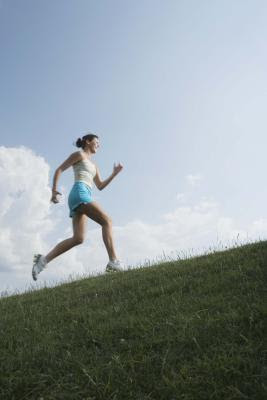 It's generally healthy to exercise during early pregnancy, as there are many benefits--you may feel better and even help your body prepare for the later phases of pregnancy and childbirth. If you're already training hard and you don't have pregnancy complications, you may be able to continue your intense exercise routine during early pregnancy. However, you may not be able to perform quite as well as you could before your pregnancy, either.

About one-quarter of women planning pregnancies are already performing intense exercise, according to Indiana University. In addition, about two-fifths of pregnant women report getting some exercise, ranging from mild to intense. Generally, medical studies haven't found any dangers either to you or to your unborn child from intense exercise in early pregnancy--rates of miscarriage are the same between exercisers and sedentary pregnant women. The American College of Gynecology advises pregnant women that they can perform the same types of exercises when they're pregnant as they did before their pregnancies, as long as they get the okay from their obstetricians and they don't work out to the point of total exhaustion.

Intense exercise may help you manage morning sickness, which can plague women in early pregnancy, according to Indiana University. Women who exercise during early pregnancy often feel less nausea and fatigue. However, if you suffer from terrible morning sickness that seems to last all day long, you may not feel much like going for a long run or performing a vigorous aerobic routine. If that's the case, you might benefit more from a walk through the park or a leisurely bike ride, both of which will allow you to get some fresh air but neither of which will stress your body and make you more tired in the short term.

When you exercise during pregnancy--especially when you perform intense exercise-- keep in mind your new caloric requirements so you don't lose weight. You need an additional 300 calories each day to support your growing baby, even in early pregnancy. Since intense exercise can burn 300 or more calories in half an hour, you might find you need to eat much more than usual--and that can be challenging if you also have morning sickness. Try to eat snacks throughout the day--whole grain crackers provide some fiber and complex carbohydrates and may soothe a rocky stomach.

Although you should be able to continue intense exercise during early pregnancy, there are a few forms of exercise you should avoid, according to the University of Maryland Medical Center. Skip gymnastics, horseback riding, skiing, ice skating, hang gliding and especially scuba diving in both early and late pregnancy. If you have certain conditions that are fairly common in early pregnancy, such as vaginal bleeding, dizziness or shortness of breath, dial back your routine or quit exercising entirely to protect both your child's health and your own. In addition, do not exercise if your body tells you to stop--listen to both your obstetrician and your own body to determine how far to take intense exercise during early pregnancy.
Share to: